Ann Nisbet Studio is a Scottish Architecture and Design Studio specialising in Rural Architecture and Master Planning, Residential Projects, Community Engagement Projects and Installations. The studio works throughout Scotland and the UK with a particular focus on Ayrshire and Arran, Angus, Argyll and Bute and the Highlands and Islands.

She has worked on many projects on Scottish Islands including Isle of Skye, Isle of Coll, Isle of Tiree, Harris and Lewis. This has given her specialist knowledge in understanding the requirements and logistics of designing and constructing buildings in these environments.

The practice provides a strong client service, with each project being unique and developed through a research led response to the site, the brief, the budget and an on going dialogue with the client. Throughout this process, innovative ideas are conceived, tested and communicated through sketches, drawings,  models and 3D models.

We have a long standing working relationship with other members of the design team such as Structural Engineers, Drainage Engineers, Planning Consultants and Heating Engineers thus ensuring an excellent service from every aspect of the team.

In 2004, she moved to the Isle of Skye to work with Dualchas Architects, after two years on Skye, she returned to Glasgow to establish their mainland office. She was Principal Architect there until Autumn 2011. During this period, she worked on many rural housing and community projects throughout Scotland and it’s islands, winning several awards for her work,  including the Grand Prix Award and Residential Award at the 2008 Rose Design Awards.

Ann co-founded Edo Architecture, a small Architecture and research studio, which undertook several community based projects, over a period of 18 months. These included Everybody’s House and the Ghost of Water Row, a community architectural installation, which won an RIAS award and was runner up in the prestigious Andrew Doolan Awards for Best Building in Scotland in 2013

She formally established Ann Nisbet Studio in late 2013. The studio’s first major project Newhouse of Auchengree, which was completed in 2015, won several awards including the GIA Supreme Architecture Award, a Scottish Award for Quality in Planning, RIAS Award and a RIBA National Award. The project was also shortlisted for RIBA House of the Year.  In 2017, Ann was a finalist for ‘RIAS Emerging Architect of the Year’ and nominated as one of ‘five to watch in 2018′ by the Architects’ Journal

Ann is an ARB registered Architect, a member of the Royal Incorporation of Architects of Scotland (RIAS) and Royal Institute of British Architects (RIBA). She is also a Director  of  the Scottish Ecological Design Association and a board member of the Langside Halls Trust.

Fay graduated with a First-Class BSc (Hons) In Architecture in 2015 from Strathclyde Architecture School. She worked as a RIBA Part I Architectural Assistant at Anderson Associates in Stornoway on the Isle of Lewis, where she developed a strong interest in rural architecture, landscape and place. In 2016 she returned to Strathclyde graduating from their ‘Advanced Architectural Design’ programme with a Postgraduate Diploma with Distinction.

Fay’s work, both in education and in practice, has been founded in an understanding of place; an approach which aims to create architecture that draws on local history, landscape, culture and microclimate.

Prior to joining Ann Nisbet Studio, Jake worked as a RIBA Part I Architectural Assistant at David Chipperfield Architects in London, working on a variety of projects including the extension to the Metropolitan Museum of Art in New York and Whanau Farm, a private residential project in the Oxfordshire countryside. In Gothenburg, he worked at Kjellgren Kaminsky Arkitektur on several social housing and residential projects, as well as a Swedish Rescue Service lifeboat station and community facility in Roro, a remote island off the Gothenburg archipelago. 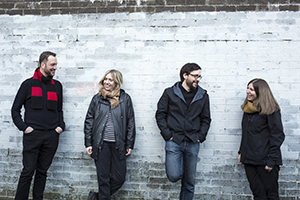 We work with a series of collaborators on a project by project basis.

Joshua Brown has collaborated on a number of projects including the ‘Propping Through Riverside’ Installation and the ‘Ghost of Water Row’ installation. Currently we are working together on a research project entitled ‘COMMOC Collective’ that looks at ideas surrounding ‘Community of Making, Making of Community.